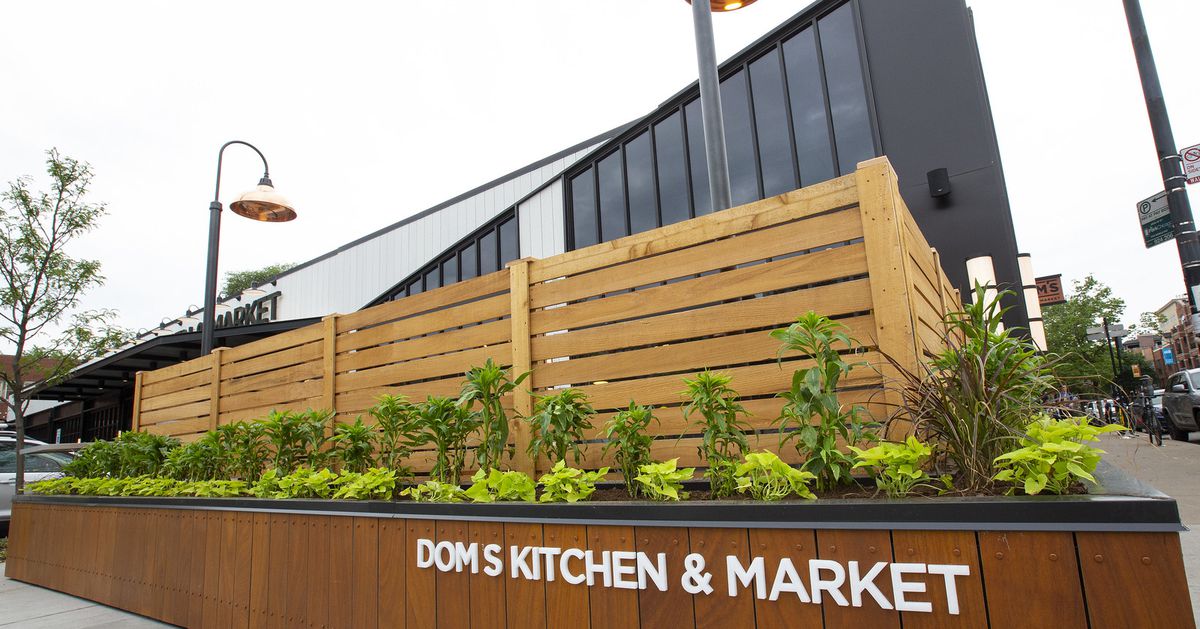 The line separating restaurants and grocery stores further blurred during the pandemic. Without dining rooms full of customers, many restaurants (Pisolino, Daisies) embraced the general store model and began selling gourmet items, produce, and sauces. Meanwhile, traditional grocers enjoyed record profits with the general public cooking more at home after doctors told them to avoid restaurants to be safe.

But still, stores face stiff competition from online retailers like Amazon, and that’s something the braintrust behind Dom’s Kitchen & Market wanted to address even before COVID-19. The owners of Dom’s combine grocery store experience with venture capital and hope to open 25 locations in the Chicago area and beyond. The first location opened Tuesday morning at the corner of Diversey and Halsted on the border of Lincoln Park and Lakeview.

The space is meant to be experiential with Instagram-friendly lighting so shoppers can snap shots of dishes like the Fresh Prince of Chicago, a callout to Will Smith’s TV show that combines Chicago’s Italian beef with a Philly cheesesteak (skirt steak, pickled sweet peppers, fontina, giardiniera aioli). There are four restaurant stalls inside the space with a coffee bar that also serves wine and beer. A room with a skylight feels like a West Loop restaurant and there’s patio seats in front and a pickup window along Diversey marked by a loading zone where customers can hop out of their cars and quickly pick up special party orders like whole porchettas, charcuterie trays, and more.

Here’s a rundown of the restaurant stalls customers will find inside:

Neighborhood bakeries, like West Town and Molly’s Cupcakes, are represented.

Mariano’s experience comes from founding his namesake grocery chain and working at Roundy’s. Dom’s is smaller, the Lincoln Park location is deceptively large taking over a former strip mall, but it’s still at 17,800 square feet. Mariano, along with co-founders Don Fitzgerald and Jay Owen say they want to draw customers by offering items that they can’t get anywhere else. They’ve struck a deal with Tortello, the Wicker Park pasta shop, to carry fresh noodles. Owner Dario Monni will be on hand for pasta-making demonstrations, much like he had at Time Out Market Chicago before the food hall temporarily closed during the pandemic. The Dom’s deal is advantageous for Tortello, introducing him to new customers wherever the new would-be chain opens its next store. Fitzgerald says they want to give chefs a platform and are willing to bring in talent that’s not established, perhaps giving an Instagram culinary phenom a licensed space to sell food.

Like Time Out, Dom’s is meant to remind customers of a European market. That’s one reason they brought in Bonci’s, the famous Roman-style pizza maker that opened its first U.S. shop in West Loop. Bonci USA’s Rick Tasman says teaming up with Dom’s gives him a low-risk way to expand into new markets without about lease or other overhead costs. It might be Bonci’s new expansion strategy if it works out.

Owen says Dom’s competition isn’t Jewel or other grocery stores. It’s restaurants and coffeeshops, including Starbucks. They want to attract laptoppers who can grab a breakfast sandwich in the morning, a pressed panini for lunch, and to stay for a glass of wine at night. A customer also has an option to grab a steak from Meats by Linz and a veggie side to cook at home.

Customers will also notice there’s no self-serve salad bar or prepared food station. Mariano says salad bars were on their way out before the pandemic and that contamination worries from the last year drove the final nail in their coffins. Instead custom salads are available from a stall called Plant Butcher that also offers fresh juices.

Dom’s isn’t the first grocer with food stalls, but Owen points out the stations are often on the sides. For Dom’s, the food stalls are the center of attention inside and the engine that makes the rest of the concept hum. That wasn’t always the case as initial designs called for Dom’s to feel, well, more like a grocery store. New York-based Rockwell Group, the same firm that designed Tao Chicago and RPM Seafood, altered those plans to make it feel more like a restaurant.

Executive Chef Jon Rollo worked at HMSHost, the food service provider at O’Hare International Airport that lured names like Rick Bayless (Tortas Frontera) and Paul Kahan (Publican Tavern) to the concourse. Rollo sees a parallel at Dom’s as he had to convince vendors like Bonci and Meats by Linz that Dom’s was the right partner. He had to sell vendors on Dom’s commitment to quality.

The grocery store also provides a soft landing for former restaurant workers tired of working late nights. Dom’s closes at 10 p.m. and that provides a stronger work-life balance for those burned out on the hospitality industry. Rollow says having these workers bring valuable experience to ensure Dom’s food service operation runs smoothly. About 60 out of Dom’s 150 workers serve the kitchen side. Starting wage is $15.50 per hour.

Eventually, Dom’s will offer delivery, but Owen says they want to focus on establishing high standards. Some point to a dip in quality at Mariano’s after the Kroger acquisition in 2019. That won’t be the case at Dom’s, ownership ensures. They’re striving for consistency, hoping that their market modernization will resonate with Chicago and beyond.