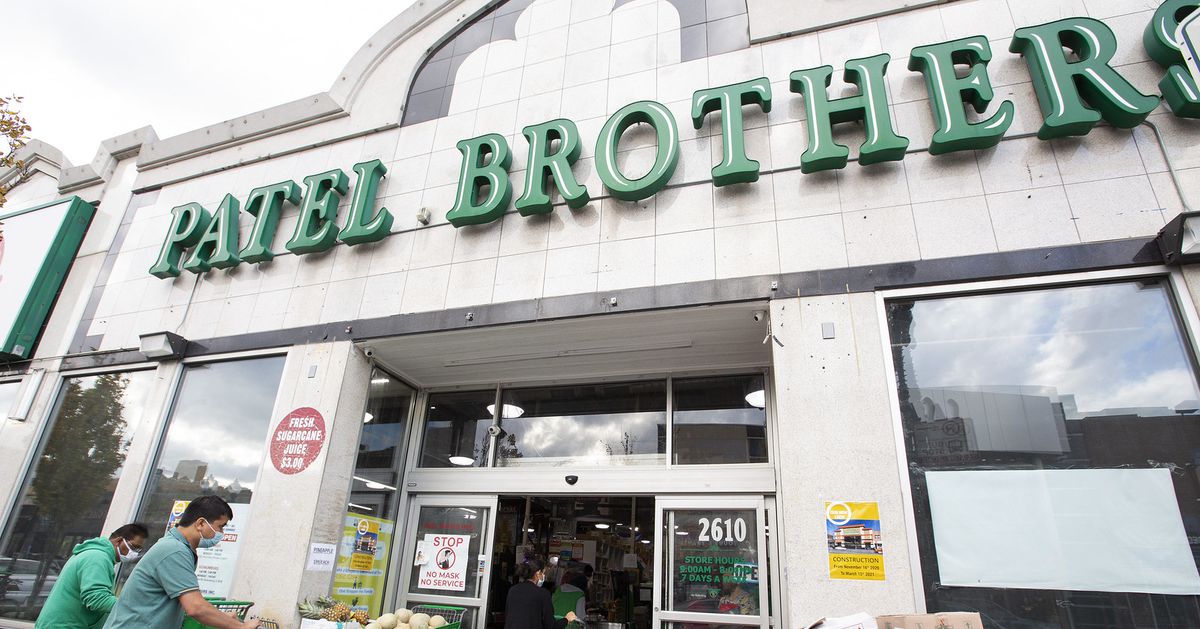 Devon will always hold a special place for the owners of Patel Brothers, no matter how large the grocery chain grows nationwide. Devon is the street on Chicago’s North Side where South Asian restaurants, sari shops, and jewelers have stayed assembled for decades, an area that reminded immigrants of home, and others experienced new cultures. But the area has been struggling lately, and that’s prompted the Patels to invest $2 million in building a replacement store to spark a community renaissance. They intend to open the new space in mid-May at 2610 W. Devon Avenue.

The very first Patel Brothers opened in 1974 inside a 800-square-foot space near the 2000 block of West Devon. That store is long a memory, and they’ve moved operations multiple times through the decades until finding their current home. That store helped brothers Talashi and Mafat Patel turn their name into a nationally recognized brand.

“Everyone has their affection toward the store,” says Mafat’s son, Swetal Patel, says. “The people that know the store, they know my uncles are always there.”

Devon has been without a Patel Brothers since the day after Diwali, November 15. Crews would demolish the building to make room for a 7,000-square-foot replacement. The design will be modern — a little sibling to the 28,000-square-foot superstore the Patels opened in 2019 in suburban Niles. The new store won’t have food stalls, but there will be a bakery with snacks like samosa, chaat, and flatbreads (like South Indian favorite chappathi). The family first pondered plans to open a new store in June 2020, the new store was beyond renovations. They wanted to start anew.

The Patel Brothers chain holds cache among Indian, Pakistani, Nepalese, Bangladeshi, Sri Lankan, and other South Asian families. The brand has moved beyond Devon with more than 50 stores spread across 19 states. The brand’s popularity continues to grow, says Swetal Patel. The family has done research which shows that 15 to 18 percent of its customers are not of South Asian heritage.

The recently-closed store that was razed debuted in 1987, when Devon was a midwestern hub for South Asians living in cities like Detroit and Milwaukee would plan trips to Chicago around their visits to Patel Brothers. But now 34 years later, Devon is no longer the only place in the area where customers can grab a bottle of Limca, a few threads of saffron, and a dozen samosas. The South Asian population has expanded to the suburbs where Patel Brothers has opened stores in Naperville and Schaumburg. Other merchants have emerged including the Mall of India, also in Naperville.

And that’s taken focus away from Devon. The pandemic has hurt businesses with restaurant closures and decreasing foot traffic. Chinatown, Greektown, and Asia on Argyle have seen similar drops. The pandemic has further harmed the community as the West Ridge neighborhood that Devon stands reported a spike in COVID-19 cases in spring 2020. That stained the street’s reputation and kept customers away with a narrative that shops were shuttered and the narrative that Devon, as a whole, was closed. That was never the case, as restaurants and stores remained open with social distance policies in place.

Swetal Patel recalls how in the past when new restaurant openings on Devon and magazine articles on Indian food attracted a customer base unfamiliar with the cuisine of the subcontinent. Through pretty photographs and experiencing masala for the first time, customers would come into Patel Brothers and ask workers what ingredients they’d need to replicate those tastes at home. But it’s been years since Devon celebrated an anticipated restaurant opening. A few restaurants have instead closed. That synergy has suffered as a result. Swetal Patel says his family wants to spark new development with their investment and inject some life into Devon.

“I didn’t think of that,” Swetal Patel says with a laugh.