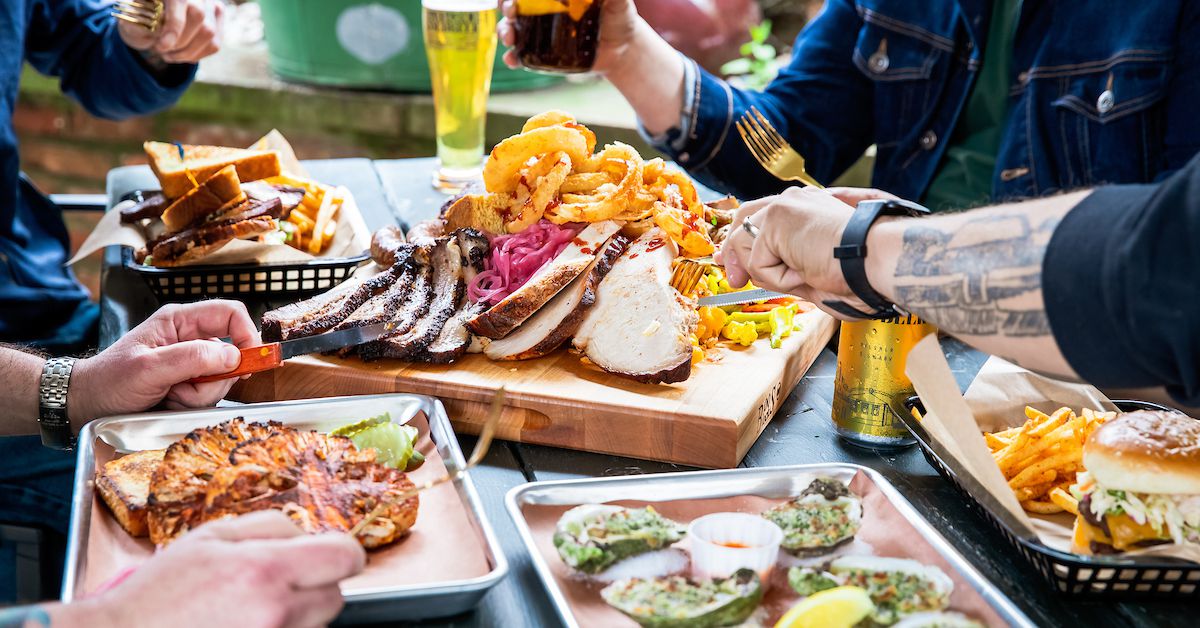 Barbecue and music venues have a storied tradition across America, whether it’s Kingston Mines in Lincoln Park, Buddy Guys Legends in the South Loop, or even at the B.B. King’s Blues Club mini chain. A much loved Chicago-area venue, FitzGerald’s in suburban Berwyn, is about to follow those illustrious examples. Under the direction of chef John Manion (El Che Steakhouse & Bar), FitzGerald’s will unveil its own smoked meat operation, Babygold Barbecue, on Thursday, May 6.

Manion’s love of cooking meat over a fire has been documented, from serving steaks at Más in Wicker Park to his current restaurant in West Loop. He’s even co-written a zine with a very simple title: Meat Project: A Backyard Fire Cooking Zine.

When FitzGerald’s owner Will Duncan asked Manion, also a resident of Berwyn, if he would consider taking over the food at the night club, Manion says he began thinking about the venue’s legacy, about the great rock, bluegrass, jazz, and blues shows that have taken place.

“It was always a fit for barbecue; it’s FitzGerald’s Night Club, nothing else made sense,” Manion says.

Though Chicago has its own signature barbecue style with aquarium-style smokers, Manion feels being in the Midwest that Chicago is at liberty to meld a variety of regional styles. At Babygold, the result is “Berwyn style,” and, no rubber chickens will be involved: It’s a $29-per-person deluxe plate with baby-back ribs, pork belly, brisket, and jalapeño cheddar sausage. It’s a four-person minimum and those without larger appetites shouldn’t bother.

There’s also barbecued cauliflower. Manion says they treat it like a rib, rubbing it, smoking it briefly before throwing it on a flattop for a quick sear before serving. Manion isn’t a fan of jackfruit, an ingredient many vegetarians love as a meat substitute for barbecue. It took him a few tries to perfect the recipe; he didn’t want the cauliflower head to be overwhelmed with smoke. Beyond the barbecue, Babygold also has a New Orleans tinge thanks to a variety of po-boys including a smoked shrimp variety.

Manion has also teamed up with Kinslagher Brewing Company — located down the street from Berwyn in Oak Park — on a Czech pils called “Babygold Cold Beer.” FitzGerald’s customers can grab cans, and they can also buy the beer at El Che. Manion is also selling a trio of barbecue sauce including a signature mustard.

FitzGerald’s is just one of those places that makes people emotional with nostalgia, waxing poetic about concerts with friends. Knowing that passion for music, Manion knows that barbecue will never be the star of the show. FitzGerald’s is in year No. 2 under the ownership of Duncan, a veteran Chicago bartender who fell in love with the 41-year venue. Manion has a great deal of respect for Duncan who’s committed to preserving FitzGerald’s traditions while ensuring the hallowed venue survives the pandemic. Duncan held outdoor concerts last year, giving customers a sorely needed way to socialize safely.

“FitzGerald’s is really his baby, and I’ve been invited to play in his sandbox,” Manion says of Duncan.

Check out the menu below.