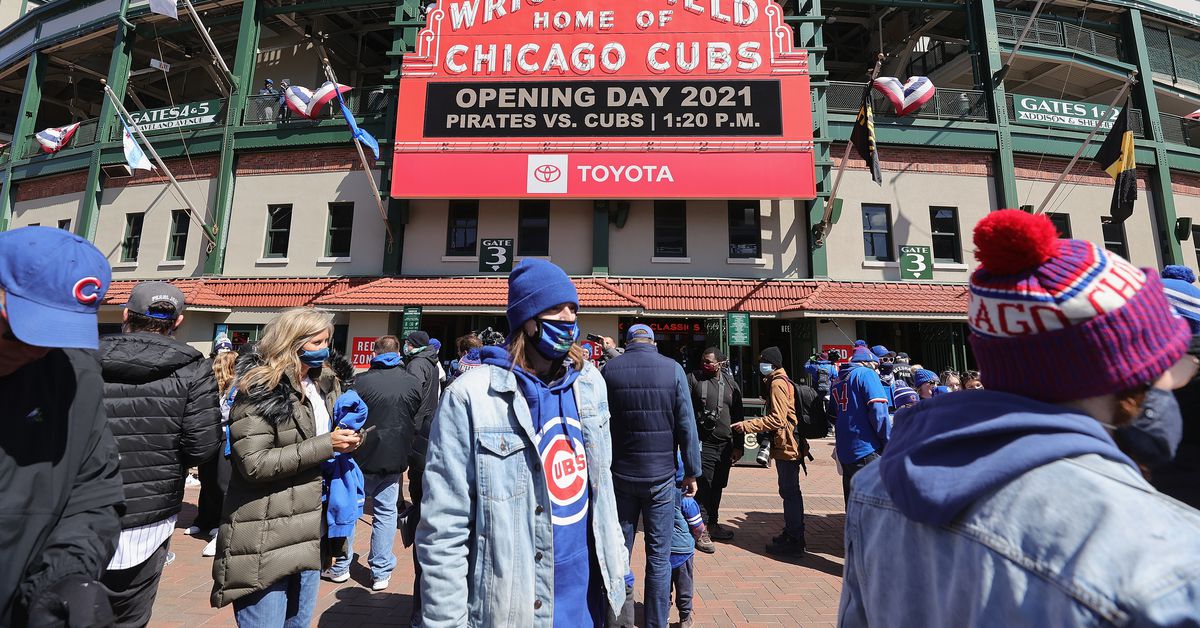 For the first time since 2019, Wrigley Field (capped at 25 percent capacity) reopened to fans on Thursday as the Chicago Cubs took on the Pittsburgh Pirates for the season opener. Many donned Cubs-branded beanies and jackets to combat biting winds and temperatures in the high 30s.

It’s a different stadium experience in 2021 with a litany of safety procedures to lessen COVID-19’s spread. The park is enforcing six-foot social distancing rules between parties. Roaming vendors hawking peanuts, hot dogs, and beer are absent this year. They’ve been replaced, at least for the time being, with a mobile ordering system accessed through a QR code printed on barriers between seats. Fans can pick up food in designated areas or have items brought to them.

A limited-contact ordering system makes sense on its face, but Opening Day’s rollout was rocky, according to the Tribune: problems with internet speed and glitches in the ordering platform stoked frustration among hungry patrons who poked at their phone screens with cold fingers, trying to elicit a response from the system. Vendors were also unhappy, stymied by computer delays and malfunctions. Though they couldn’t traverse the stands as usual, some were present to pick up discarded cups.

Despite hiccups, the return of baseball is vital to the survival of restaurants and bars in the surrounding neighborhood. Beloved watering holes, including Nisei Lounge and Murphy’s Bleachers, have struggled through multiple pandemic shutdowns. Many of these local institutions preceded the newer, slicker face of Wrigleyville represented by the Hotel Zachary (a massive, modern structure backed by the owners of the Cubs, the Ricketts family) that opened in 2018 across from Wrigley Field with multiple bars and restaurants. The pandemic has hurt even the shiniest and newest venues. For example: There’s still no update on the Maddon’s Post space. That’s the restaurant at Gallagher Way (the parkway in front of Wrigley) named for former Cubs manager Joe Maddon. It closed in December 2019, before the pandemic had made major headlines in America.

— True to its word, Manny’s Deli gave away 1,000 free sandwiches on Tuesday to long lines of patrons, despite the overall failure of its campaign to get customers to wear masks properly without being asked.

— Emanuel “Manny” Williams, owner of longtime bar and nightclub Manny’s Blue Room in southwest suburban Robbins, is retiring for the second time and trying to sell the business, according to the Tribune. Over the years, the club hosted famous performers like blues harmonica player Jody Noa and musician Vance Kelly.

— An underutilized stretch of Lincoln Avenue (near Damen Avenue) will be transformed into an arts district, per a $15 million project to designed to spur economic growth from Western to Catalpa Avenue, according to Block Club Chicago. The plan includes additional development for the Ainslie Art Plaza — a triangular parcel ideal for outdoor dining — that opened last year just east of 4844 N. Lincoln Avenue.

— Chicagoans will take every opportunity and venue — including TikTok — to voice their food opinions. User @big_mich_energy offers her take on Federales, Pink Taco, and Velvet Taco in a viral video: